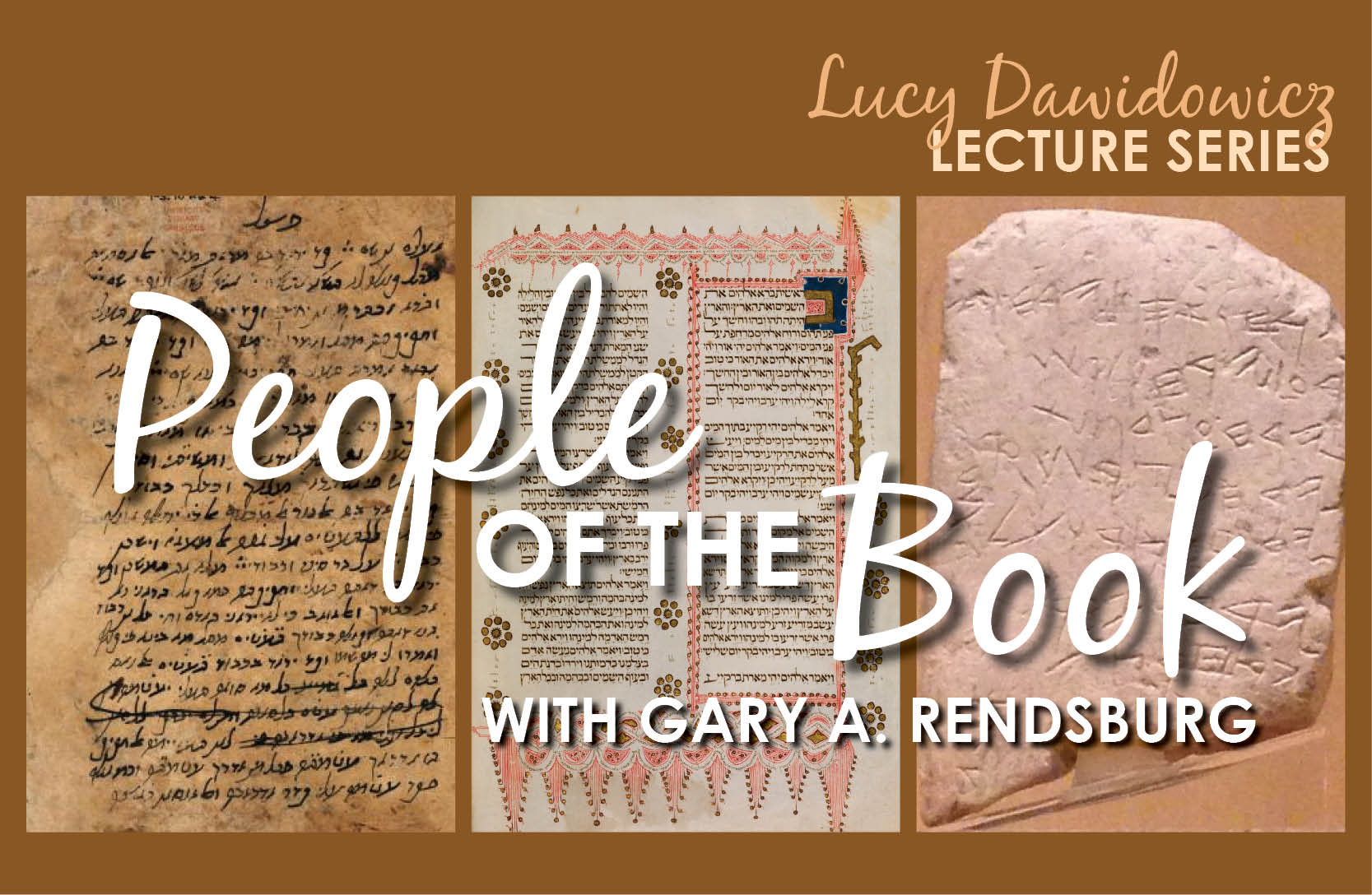 “People of the Book: from Canaan to Cairo to La Coruna” with Professor Gary A. Rendsburg, PhD, Distinguished Professor of Jewish Studies and History and the Blanche and Irving Laurie Chair in the Jewish History at Rutgers University.

Jews have been “the people of the book” through all the many twists and turns of their 3000-year history. Although the Jewish people has flourished in varying historical circumstances and geographic regions, our robust attachment to the written text has persisted through time. Our tradition’s great books have had a powerful impact through millennia on Jewish minds, hearts and souls.
Join us for a newly structured three-part Lucy S. Dawidowicz Lecture series in 2023, as Professor Gary Rendsburg leads us through the fascinating history of the abiding Jewish engagement with the written word. Dr. Rendsburg’s lecture series will traverse centuries of diverse Jewish experience, unified by a passionate embrace of books and their study. The annual Lucy S. Dawidowicz Lecture, usually given in a single evening, will be stretched out in 2023 over three Sunday mornings, allowing us to luxuriate in the exciting teaching of a leading scholar.
In the first lecture, Beginnings: Writing in Ancient Israel, Dr. Rendsburg will initiate our intellectual journey with the earliest evidence from ancient Israel, ranging from the smallest of clay and stone inscriptions during the time of King David to the writing of extended literary compositions on papyrus and parchment scrolls, including the remarkable recovery of the burnt Leviticus scroll from the Ein Gedi synagogue.
The second lecture, From Córdoba to Cardamon: The World of the Cairo Geniza, will highlight the treasures of the Cairo Geniza, constituting the greatest Hebrew manuscript discovery ever made, the approximately 300,000 documents found in the attic storeroom of the Ben Ezra Synagogue (Cairo) during the 1890s. The documents reflect every aspect of Jewish social and religious life, including our oldest extant copies of the Passover Haggadah.
The third lecture, The Greatest Bible Ever Written: Kennicott no. 1, Bodleian Library, Oxford, will focus on the crown jewel of all medieval Hebrew manuscripts: the joint production of a master scribe and an ingenious artist, written in La Coruña in far northwestern Spain in 1476, shortly before the Spanish expulsion. This lecture will present both the story of the creation of the manuscript and the amazing tale of how it was owned by a Scottish earl before it reached the confines of the Bodleian Library, Oxford.
The annual Lucy S. Dawidowicz Lecture is named in memory of the leading 20th-century historian of the Holocaust and an Or Zarua member in its earliest years. Professor Rendsburg is the most recent of a long line of prominent scholars to deliver this significant lecture. Dr. Rendsburg, Distinguished Professor of Jewish Studies and History and Blanche and Irving Laurie Chair in Jewish History at Rutgers University, has been a premier biblical scholar and charismatic teacher for decades. He has previously taught at (among other institutions) Cornell, Canisius, Oxford, UCLA, Colgate, Binghamton, and Penn, has been a guest lecturer on several continents around the world, and is the author or editor of 17 books and more than 200 articles. He is spending 2022-23 on sabbatical as a visiting professor at Bar-Ilan University and the Pontifical Biblical Institute in Rome.
Please join us in early 2023 for an extended exploration by a wonderful scholar of the Jewish people’s perennial engagement with and celebration of the written word. Dr. Rendsburg’s three-part lecture series promises to be a captivating and compelling retelling of an old and enduring story.
-by Marc Ashley