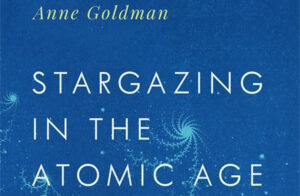 Click HERE to watch a video of our Author’s Night with Anne Goldman who read from and discussed Stargazing In the Atomic Age. Anne’s powerful provocations and reflections on the intellectual and artistic power of Jews in the nuclear age offered us much to think about.

We were delighted to welcome author Anne Goldman who read from her book and was in conversation with Rabbi Bolton.

Anne Goldman’s Kirkus-starred essay collection, Stargazing in the Atomic Age, was published by the University of Georgia Press in January. Her fiction and nonfiction have appeared in Tin House, the Guardian, the Los Angeles Review of Books, The Georgia Review, the Gettysburg Review, and the Southwest Review, among other venues. Her essays have been named as notable in Best American Essays, Best American Science and Nature Writing, and the Best American Travel Writing. Nominated for a National Magazine Award, she is the recipient of fellowships from the Ahmanson/Getty Foundation and grants from the National Endowment for the Humanities and the Woodrow Wilson Foundation. She teaches creative writing and American literature at Sonoma State University and is at work on a second essay collection, “An Aria for Insects and Other Essays.”

At this literary summer event Anne read passages and was in dialogue with Rabbi Bolton. There is a wonderful combination of personal memoir and fascinating intellectual investigations of important figures in the world of the sciences and art in Stargazing.